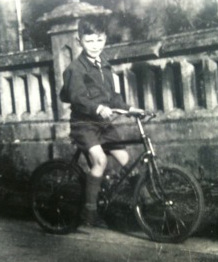 A young cyclist in the making

I am a relapsed cyclist. Up until the age of 20 or so I rode a bike, but as soon as I obtained a driving licence I bought an old banger and consigned my blue drop handlebar bike to the tender care of a nephew, from whence the bike went who knows where.

In 1988 after a life of running, playing rugby, cricket and any other sport I could find, I found myself as a retrained PE teacher in a Primary School in Bradford on Avon with an arthritic knee. “Keep the joint moving without impact” I was advised. Good advice, which led me to buy a Raleigh with eight gears, which would now be classed as a Hybrid, ending a gap of over 25 years without a bike.

With this bike I commuted for five years from Combe Down to Bradford on Avon along the Kennet and Avon Canal, in all weathers. On retirement, I was made redundant in 1994, my leaving present was a more appropriate “Ridgeback Hybrid”.

I was very happy with this hybrid until it was stolen from my back garden shed. My next bike was a “Giant” mountain bike on which I could climb any hill in Bath. This bike served me well and was the bike that I first rode touring in Italy. However, heavy weight and slow speed were features that I wished to improve on.

This led to my present tourer, a hybrid “Ridgeback Supernova” specially fitted with 24 mountain bike gears. Still a little too heavy but a solid performer, which has carried me three times along the coast of Italy and Sardinia. 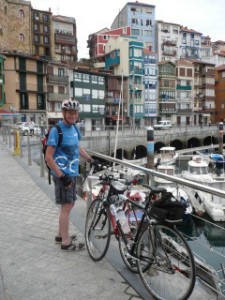 Cycling in Northern Spain in 2012

I also have the iconic British 2 gear Brompton folder, for town use and to carry on the train to use on my visits to London. The bike was won by our friend Laura in a draw, but she didn’t want it so sold it to me at half price.

Two years ago I came full circle in bike purchase and bought a “Genesis Equilibrium”, drop handle bar, steel framed, quite beautiful, road bike. A wonderful piece of machinery that I love, perhaps because it reminds me of my schoolboy Harlyn Club (put together by the bike shop from bits and pieces) road bike. I am now the proud owner of three bikes in a five bike household.

I am no more than a leisure cyclist, but I can climb hills. I have taken part in the first two Bike Bath Sportives, riding with my partner, Nic Rattle, the shortest distances of 20 and 30 miles. We have cycled in Italy on the coast with touring bikes five times, covering all of the “boot” and took our road bikes on the back of the car to Northern Spain and the South of France to cycle and see some of “Bradley’s Tour” last year.

We have most recently cycled the brilliant Coast to Coast Sustrans route from Barnstaple to Plymouth, covering the 100 miles in 3 days in the middle of the recent heatwave. At the end of August we will cycle in Cornwall on a circular route from Truro of about the same distance.