Three months ago I wrote an article for the Local Government Association’s weekly magazine “First” in a section called “Last Word”, about 20 mph speed limits.  Implementing 20 mph speed limits is one of the 10 commitments in the Times Safer Cycling campaign and the speed limits are being rolled out across Bath and North East Somerset Council’s area.  The article is reproduced below:

As I look out of my window I can see three little girls riding their bikes in my street. A common occurrence here, where people in this quiet residential street are aware of children playing and are careful, but in other streets this is pretty unusual. In the past most children liked to play out close to home, but it is now more likely they will be kept indoors to play, because of the danger of speeding traffic going past.

Across the country 44 councils so far, have decided to implement “signs only” 20 mph speed limits. The usual justification for this move is to make 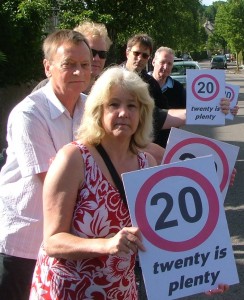 our residential roads safer. The Transport Research Laboratory found that approximately 98% of pedestrians will survive a 20mph collision. Their chances drop to around 93% at 30mph and 69% at 40mph.

However, putting in 20 mph speed limits in residential streets means more than just making streets safer. It is the beginning of a culture change where people on foot and on bikes, and children playing, take precedence over passing motor vehicles. It’s about giving control of streets back to the people who live in them.

Councils can do signs only “blanket” coverage for a fraction of the cost of 20mph zones, where there are physical measures such as speed tables, to prevent drivers from breaking the law. 20 mph zones, with restraints still have their place but with reducing funds less of them can be implemented by Councils.

Critics say that “signs only” 20 mph speed limits cannot be enforced, but then enforcement of any speed limit is difficult given reducing police resources, but that is not the point. If councils achieve a small reduction in speed it has a big affect on safety. Signs only 20 mph should be self enforcing by drivers, by becoming the default speed limit and exceeding it should become as rare as the non wearing of seat belts.

Government advice now encourages Traffic Authorities to consider 20mph restrictions not just in residential areas, but also on busier roads where the numbers of pedestrians and cyclists are—or could be—significant. A sure sign of a growing move to 20 mph.