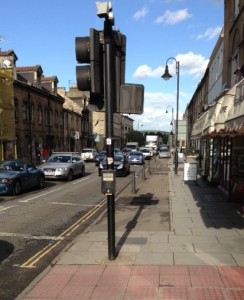 Present cycle/delivery lane that will go under new proposals. What happens to people on bikes then?

A  £750K project on London Road has not improved the lot of cyclists living in or cycling through the area.  This is the main entry to the city from the east and has long had problems with air quality and congestion, yet when the chance to reduce congestion and pollution by making it easy for people to switch to bikes has come, it has not been taken.  In fact the proposals put forward will make the road a “no go” area for cyclists.

This project has had input from the local community, but people who cycle were not represented.  Details of the scheme, which in other respects is an improvement, can be found here: http://www.bathnes.gov.uk/services/planning-and-building-control/major-projects/london-road-regeneration-project

Below are two comments on the affect the scheme will have on people riding bikes:

I am co-chair of a local green organisation called Transtion Larkhall. We are trying to promote a safer cycling route along London Road to the city centre.

By chance we discovered an imminent plan to make London Road in vicinity of Snow Hill and Morrisons more pedestrian and car parking friendly and less cyclist friendly.

This ‘Gateway’ plan would involve removal of the present cycle path on the inbound pavement between Walcot Buildings and Clevelan Place junction. It would be replaced by car parking on the pavement.

Although this present cycle path arrangement is of limited value it does offer some alternative to the two narrow and usually
vehicle-packed traffic lanes approaching the risky Cleveland Place junction.

Its removal would make cycling on London Road even more unpleasant and risky than it is at present.

Moreover, it would remove space for a significant section of a more extensive safe cycling route on London Road. Transition Larkhall’s Safe Cycling group has proposed this to B&NES but has, as yet, received no response.

If you cycle on London Road or you care about the welfare of your fellow cyclists, and about encouraging more cycling in Bath, please *object* to these proposals. By emailing: Jessica
Turner Jessica_Turner@bathnes.gov.uk

On behalf of the Bath Cycling Club I strongly object to the proposals because they have the potential to make cycling on this road more hazardous and less attractive to cyclists than at present.  The scheme does not meet the Council’s stated aim of encouraging cycling, for all it’s health and environmental benefits it can bring. In fact if implemented in it’s current form it is likely to discourage cycling as a means of transport.  My detailed reasons are as follows:

1. Short lengths of advisory cycle lane have been proposed alongside regular traffic flows, which is far from ideal.  However even worse, the cycle lane comes to an abrupt halt at the pavement build out, to narrow the road ( north side between  Snow Hill House and the Esso Garage).  This means that a cyclist using this lane has to come to a stop and have to wait for a safe gap between vehicles to pull into the flow of traffic, which could be a long time. Alternatively they take their chances and pull out into the traffic flow  where drivers will not be expecting such action.  This increases the risk of collisions between vehicles and cyclists.

2. The scheme does not mention the removal of the cycle lane  near Clevland Bridge  for 7 car spaces.  In Bath City Council’s days this was an actual off road cycle lane.  In the early years of B&NES council, despite protests, it was converted at some £60,000 to a loading bay /cycle lane.  Cyclists are meant to get off and walk on the pavement past parked vehicles.  This is as impractical as it is demeaning in it’s treatment of cycling as mode of transport.. The current scheme even removes that very limited cycling facility in favour of car parking, forcing cyclists into the busy road traffic.

3. London Road is an ideal route for cyclists to travel between Larkhall, Lambridge , Batheaston and Bathford and the centre of Bath  as it is a basically a level route.  The only practical alternative involves steep hills and quite busy roads with considerable car parking so not likely to be attractive to most cyclists or would be cyclists.

4. It is not clear what cycle “refuge” at junction means.  Clearly this area (Cleveland Bridge junction) is very difficult for cyclists to negotiate safely.

The scheme could and should be changed to provide a separated cycle route or routes which should be part of the design. There would appear to be plenty of space, particularly on the south side. Why not move the parking into the road in place of the useless intermittent advisory cycle lane, for example, and create a safe cycle route (3m wide, two-way?) out of the pavement width? The evidence is that it’d benefit the traders as well as encourage more cycling.  There exists a Cycle Forum  with bi monthly meetings between the Council (members and officers and cycling representatives).  Why was this body not consulted over the proposals?

Add the failure on London Road, where a cycle lane is to be removed, to the inadequate consideration given to people cycling in Widcombe (see earlier post) there is a gap in the Council’s provision for cycling. Until we have a Transport Strategy it is unlikely that cycling will be given the priority that it should have, but it may be possible to get some change with a motion to Council.

The Government is leading on cycling provision, it is high time that this Council responded to the call for action by the Prime Minister:

Following our success in the Olympics, the Paralympics and the Tour de France, British cycling is riding high – now we want to see cycling soar. Our athletes have shown they are among the best in the world and we want to build on that, taking our cycling success beyond the arena and onto the roads, starting a cycling revolution which will remove the barriers for a new generation of cyclists.

Nigel Sherwen writing above has suggested a way to cater for people on bikes, but an improvement to London road’s problems of pollution and congestion can only be provided by reducing traffic.

If the present bus lane was extended all the way from the Batheaston roundabout to Cleveland Bridge junction it would provide a safer ride on a bikes and also decrease the time of bus journeys.  It might mean that more buses come into Bath along Henrietta Street and across Pulteney Bridge, but the shorter journey would be very attractive to commuters.

Despite recent developments such as the Two Tunnels, the Odd Down cycle track, the Local Sustainable Transport Fund initiatives and the council’s investment of £500K in cycling infrastructure this year, there is still nothing to prevent cycling being ignored in highway changes or new developments.

This entry was posted in Cycling around Bath, Roger's opinions. Bookmark the permalink.