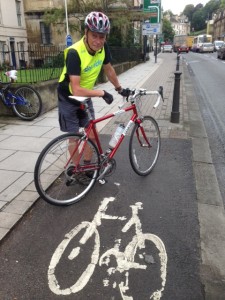 Cyclists were mobilised by the prospect of the London Road “Gateway” scheme of environmental improvements making conditions for people riding bikes worse.  Following a submission by Roger Houghton showing a segregated two way cycle lane on the inward bound carriageway the Council have come up with a scheme that does not entirely meet all the cyclists aims, but goes some way towards improving conditions in London Road for people riding bikes.

The favoured proposal that was put to cyclists earlier this week has the present cycleway retained and improved and an on road unsegregated cycleway from Morrisons to the eastern end of the present segregated path.  There will also be an on road cycle lane on part of the northern side of the highway.

At the time of writing the on road cycle lanes will be “advisory”, but they should be enforceable by Traffic Orders. Otherwise there is no incentive for vehicles not to park on them, nor to keep them free, when on the move.  I believe that the cycle lanes will have coloured Tarmac – a first for the city.

It is disappointing that Roger Houghton’s scheme cannot be entirely implemented because of Highways Officers insistence on a 6.75 metre carriageway.  This is deemed necessary for resurfacing and in case there is an accident, which requires the extra width.  I would have thought that this could have been done by having removable bollards separating the cycle lane from the vehicle lane.

However, what is certain is that there would have been no improvement for cyclists without the vigilance of local cycle advocates and without the 1300 person petition that triggered a council debate.

A success for Bike Power!