On Monday 22nd September 2014, my partner Nic and I decided to ride from Bristol to Portishead and back, mostly on old railway tracks along the Avon Gorge.

Early that morning I had received one of my front teeth as an implant – this was my last “new” tooth and it had failed at the first attempt, some 18 months earlier.  All I wanted for my birthday was “my last front tooth”!

Complete with birthday tooth we put the bikes on the back of the car and drove to Bristol’s Create Centre for coffee and cake.  We also stocked up on quiche,           it looked and tasted delicious, to have for lunch when we got to Portishead, or before if we were hungry.

We rode across the bridge to the cyclepath in lovely sunny weather, pretty warm for the time of year, to begin our ride, a round trip of  about 30 miles.  The first couple of miles of this ride, once you get used to riding with a steep drop into the river, or in this case on to the mud, as the tide was out in the Channel, is easy going and very flat.  A couple of miles into the ride the going gets rougher and I was glad that we had chosen our touring bikes rather than road bikes.  Some little inclines at this point too and pretty rough gravel terrain.

The Avon Gorge is a beautiful setting in which to ride, with woods on the south and on the north side of the Gorge and cliffs leading up to the Downs.  We could glimpse the Camera Obscura from the path, where people can go inside the building and look at the images projected from outside on to a bowl shaped structure.

The dominating feature here though is Brunel’s magnificent Clifton Suspension Bridge. The bridge was only completed after Brunel’s death.  The design was controversial, but it is a fitting memorial to the man who performed so many great engineering feats across the country.   This is a beautiful comfortable start to a ride suitable for families. 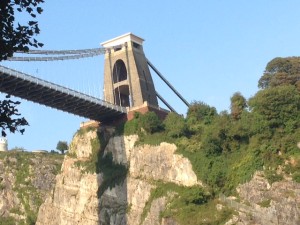 opens out into farmland, but the path although narrow is still quite smooth on this late summer day.  However after rain there will be puddles and the track will be muddy.  At times the path is covered by trees and undergrowth on both sides.

On the south side of the path there is still an operating railway carrying goods to and From Portbury Docks, following the Gorge.  It is hoped that this line will open again for passenger transport in 2019 as part of the MetroWest Project.  The present railway diverges from the Gorge to the south later on the ride, but the derelict part of the railway remains close to the cyclepath further towards Portishead.

The route the path takes is over Watchhouse Hill, probably the site of an Iron Age fort.  A Railway tunnel was dug under the hill when the Bristol Portishead line was opened.

The railway opened in 1867 with a station at Pill.  In 1926 Ham Green Halt was opened to serve the hospital.  The passenger service was cut in 1964, but freight continued until 1981.  After a gap of 21 years the line was reopened for freight in 2002.  Ham Green hospital was an Isolation Hospital for people with diseases such as tuberculosis. Sailors returning from abroad with contagious diseases were also housed at the hospital.  Before the estate was acquired by Bristol City Council in 1897 a hospital ship was moored close by until the hospital building was completed.

Familiar sight in the Tidal River Avonwas ready to be occupied.  After the descent from Ham Green Hill we passed a picturesque lake and then climbed up past the old hospital before freewheeling down into Pill.

Soon after Ham Green we come across the Avonmouth Road Bridge on the M5, an imposing structure.  A monument to the days when motor transport was everything, and to be fair motorways bringing goods into areas are fine, but the future for freight should be mainly rail.  However, some freight bound for Bristol and Bath is unloaded at Avonmouth and is transported into Bristol and Bath by a daily journey of an electric vehicle.

This “Freight consolidation scheme” costs about £9 per journey for each business.  The advantage of this system that there is a there is a reduction in HGVs coming into the cities, helping to reduce pollution and congestion.  There is capacity for many more businesses to use this facility. At present it is subsidised by both councils.                                                      Pretty swiftly after sight of the bridge comes the disused, derelict part of the former Portishead passenger line that hopefully will be reconstructed for commuters into Bristol in future.  From the photo we can see an old disused tunnel and part of the railway with some of the old line still in place.

After riding around vaste open car parks, which contain imported new cars from Portbury Docks, we made our way into Portishead through the “commuter belt”. With this much new building and probably more to come, it certainly looks as thought there will be plenty of business for the Bristol/Portishead line when it reopens.  It should only take about 20 minutes into Temple Meads.

It is sad to see this once popular railway line in such a derelict state in this part, so near to Portishead, but it is only in the past few years that the reopening of old abandoned railway lines  has been considered.  The success of the Severn Beach line into Bristol shows that rail is a much quicker option than a motor vehicle.  Perhaps the golden era of mass transport is about to come again.  I look forward to the time when Michael Portillo does a railway journey on the new line from Bristol to Portishead – or am I being too optimistic?

Portishead is an obvious start to extend MetroWest and perhaps it might even have a shuttle service going as far east as Westbury.  Only time will tell whether this exciting  multi-million pound project gets off the ground. 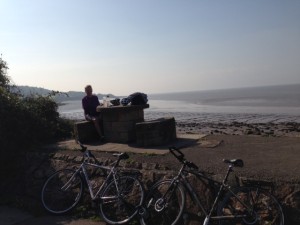 On the Channelside eating lunch

Portishead is an attractive little town with a seafront on to the Bristol Channel, where swimming off the muddy beach is not really an option, however we spent a peaceful time eating lunch before heading back to Bristol.  The town could do well to advertise its beach and boating lake more to visitors.  The lack of signs seems to indicate a lack of civic pride in the channelside.

Our ride back was uneventful, except for a stop to pick blackberries and store them in our water containers.  By this time the tide had come in and the drop into the Avon was much shorter.  Closer to Bristol there are a good number of joggers coming out from the city, so care needs to be taken by people on bikes.  Actually the joggers seemed to be going faster than us at this time of day!

This is a comfortable ride to do in a day for people not bothered about time.  We left Bristol at about 11am and got back at about 4pm, but starting early enough the ride could be done in a morning.