Four years of real progress in cycling in Bath

Cycling over the past few years has really taken off in Britain and is now very popular with people of all ages, so what has happened in Bath in recent years, during the last administration.

1.  Attitude towards the Two Tunnels project was changed to one of support from the council, rather than criticism.  Improved partnership working between council/Sustrans/Community group to complete the project.  Memorandum of Understanding signed and Sustrans commissioned to look at cycle routes within B&NES.  Reported earlier this year.

2.  A year’s trial of hire bikes was implemented on the streets of Bath.  This was unsuccessful, because there were only 4 bike stations and the Italian firm had some difficulties managing from afar.  However,  the decision was made to persevere with a hire scheme.  £25K of Local

Sustainable Transport (LSTF) funding was allocated to relaunch the scheme with a new operator, NextBike, with 10 stations; the latest to be installed in Moorland Road.  Bath is one, perhaps the only one, of small cities in UK with a hire bike scheme on street.

3.  In conjunction with British Cycling a very successful cycle circuit was created at Odd Down.  Most of the money came from British Cycling, but the council invested in new changing rooms for this multi sports hub. 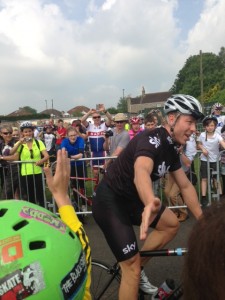 Sir Chris Hoy at the opening of the Odd Down Circuit

4.  A stage of Tour of Britain was brought to Bath in September 2014.  Further stages in future – next one in 2016.  Pressure here from local cycling clubs convinced the council that this would be worthwhile.

5.  The  Pearl Azumi cycle road race will come to Bath in June.

6. Batheaston Bridge was built across the river for people walking and on bikes.

7.  Finally managed to make the path between Bath University and Combe Down into a cycle path.  Crossings will be installed at both ends to cross the main road 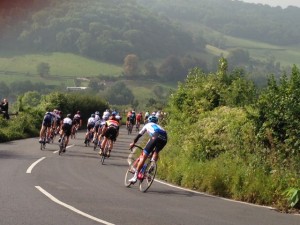 Back of Tour of Britain Peloton on Brassknocker Hill

10.  Shared path from Wells Road to Churchill Bridge to link with river towpath put in place.

11.  A shared path on south side of Wellsway was created.  Path could have gone all the way from the Devonshire Arms, but opportunity missed here.

12. A Transport strategy which places importance on cycling and walking was agreed. First ever Transport Strategy in Bath, agreed by Full Council.

13.  10% of highways budget committed to cycling in future.  This is vital for the council to continue to invest in cycling as the Local Sustainable Transport fund from Government will soon be no more

14.  20 mph signs only, enforceable speed limit rolled out across the council area.  Makes residential streets safer for cycling and walking.

15.   John Grimshaw Commissioned to look at cycle routes from Keynsham to Bristol and to the Bristol/Bath cycle path.  Could be financed by Somerdale development 106 agreement.

16. Personally signed off the Seven Dials scheme application to Govt.  One of my last acts as Cabinet member for Transport. Scheme now being implemented with contra flow in Monmouth Street as one of cycling improvements. 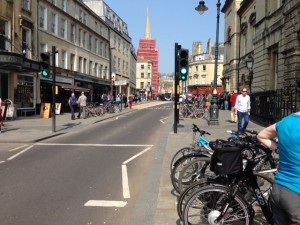 Cycle stands in High Street. Full up as usual

21. Many more cycle stands erected in Bath city centre. Even more are needed.

24. The Cycle Forum was reinstated to enable involvement of Cyclebath, CTC and other local cycling groups/clubs and individuals.  The group meets bi-monthly in the Guildhall.

There is still much to do in making streets safer for people walking and riding.  It is ambitious to aspire to the sort of cycle infrastructure that can be found in the Netherlands and in other continental cities, but serious steps should be taken to get closer to this ideal, in particular with on road routes.  These steps will make it safer for regular bike commuters.

Over this period the cycling lobby in Bath has increased its effectiveness and Cyclebath’s route from Larkhall, with the objective of making it possible for children to ride the route is a big step forward.

By using the riverside towpath through Widcombe to Bathwick it is possible provide a connection with the Bristol/Bath Railway path and Two Tunnels and a southern route into the city or to bypass Bath, on a mostly off road route.  There will be future infrastructure investment with Government Grant obtained through the West of England Partnership.