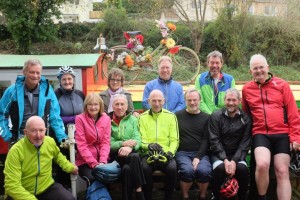 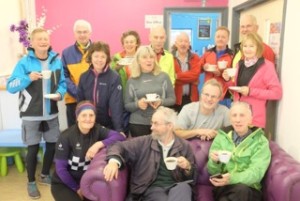 Since last October a group of bike riders have been riding about 30 miles on Thursday mornings. The idea for these gentle rides came from Tony Ambrose and they are mainly for people who are not cycling club members or serious competitive cyclists, although they are not excluded, but the idea is to get people out on their bikes on social rides, who maybe do not ride regularly.

The first ride was to Mells Walled Garden in beautiful weather on 8th October 2015, along the Two Tunnels Path and the Colliers Way from Radstock.  In fact many of the rides have been done in good weather.  However I remember one of the early rides, with not a very big attendance when it rained throughout the ride.  I have ridden most Thursdays and usually there are 10 or 12 riders.  I think the most we have had is 15 riders. 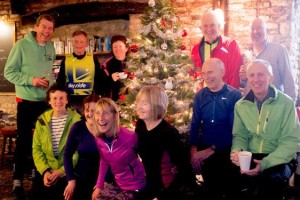 Christmas ride at pub in Doynton. Rode on the The Spinning Wheel in Marshfield for lunch on 17th December.

Many of the rides are on off road paths and very quiet roads, with the main starting points either the the Bristol/Bath Railway Path or TwoTunnels Path. 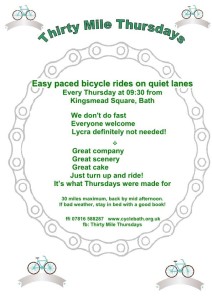 Tony’s description of what the rides are about.

The rides always begin from Kingsmead Square at 9.30am and all are welcome.  This Thursday’s ride (14th Jan) will be through the Two Tunnels to the lovely little Post Office at Rode for tea and cake, back 1 to 2pm.

Latest ride was up St Catherine’s Valley on 21st January to the cafe in Marshfield, where the group had tea and cake.  We returned via Upton Cheyney, Bitton and the Railway path to Bath.  By the time I had got back to Combe Down via the Wellsway I had clocked 50km.  Weather was great on the Cotswold plateau.

The climb up St Catherine’s Valley was difficult and there was some melting ice around, once again though some people rode it and some walked the steepest part. 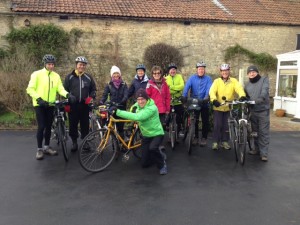 At Sweet Apples cafe in Marshfield.

Just before Christmas we rode down this valley, which was a bit hairy, because it was wet and muddy, but as always the view from the top was worth the effort.