Ride through Villages around Montreal in Aude 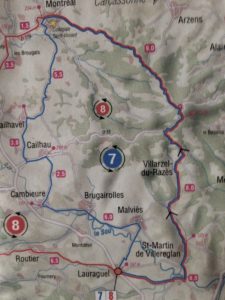 Circular route, from
Montreal at the top
of the photo

We brought our bikes here to La Force on the back of the car, so that we could do a few cycle rides while we are here.  La Force is close to Carcassonne  and well positioned for rides to surrounding villages and the scenery is fantastic.

We are situated in a valley through which the Canal du Midi runs with  rolling countryside, given over to the cultivation of vines, sunflowers, onions, melons and maize.  To north and south the hills are of the Mendips type, although in the distance the massive Pyrenees dominate the skyline.

There is not the sudden variation in heights as around Bath and the valley is wide with some inclines within it. There is often a wind, gusting at times.  In fact in a description of the area’s weather 300 days of wind per year is listed.  If in luck it can be a following wind.

French roads are fantastic for driving, mostly straight for miles, with much of the heavy goods traffic going on the Peage (toll roads).  These straight roads are not good for cycling because they are not very wide and the traffic travels very fast, however they are super smooth and French cars, by and large give riders a wide birth.  Not my sort of cycling though.  I much prefer cycling on the many small roads linking villages that are ideal for riding bikes.

On Tuesday 27th September we did a ride from a published leaflet of rides in Aude.  In the leaflet this ride was rated as low difficulty, yet it includes the longest, although not the steepest hill I have encountered. However it was mostly on small secondary roads. Even these roads have mostly good pothole free surfaces.

We began our ride by heading off the main road to Montreal at the base of the climb up to the village heading towards Villeneuve, where we spotted people selecting onions from a massive pile next to the road. This is a legitimate activity in France where any contracts allow farmers to offer surplus vegetables to the public. In the UK, supermarket contracts do not allow that sort of “gleaning”. We continued on through Cailhavel to Cailhau, where I would have stopped for coffee at a recommended restaurant called A’kotee, but it is closed on Mondays and Tuesdays.

On through Cambieure and a long flat road into Brugairolles, where we passed Domaine Gayda, venue of our meal and jazz last week with Pascale and John, and Pascale’s brother Kerry and partner Ruth. 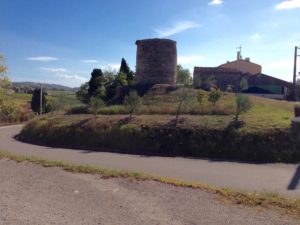 Malvies tower opposite the
Closed Boulangerie

The next village Malvies boasted a sign for a Boulangerie and Pattisserie – by this time we were ready to eat something, so imagine our disappointment when we found that the shop was open only between 9am and 10am in the morning.  Many of the small villages that we have come across have no shops or a cafe.  Nic had foresight enough to bring some chocolate! 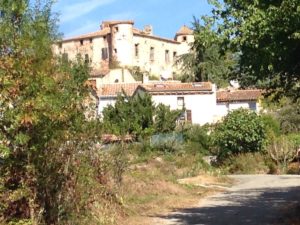 From Malvies to Villarzel du Razes we began to climb.  We were hopeful that this village might have a cafe, but although there is a monastery, there is no cafe.  This seemed to be our last chance before Montreal of getting a coffee and something to eat.  Beyond the village the climb was a series of hairpin bends that seemed to go on forever.  Mostly a steady incline with occasional short steep bits. 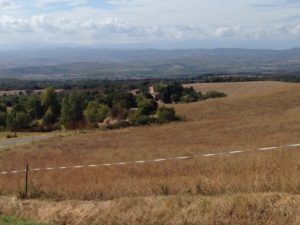 Looking back at
the Monastery at
Villarzel du Razes

I thought we would never get to end of this hill, but once we did at the summit of Mont Haut (422m), we were higher than our destination, Montreal and the end of this ride was a lovely downhill ride.  Arrived Montreal just in time for duck and chips for me and lasagne for Nic, with a couple of cool beers.  A welcome reward for our efforts in the sun.

Facts and figures of the ride (excluding return home from Montreal to La Force):