What happens to cycling after Covid 19? 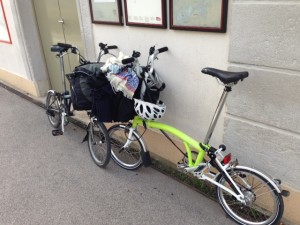 Brompton bikes, waiting for a train.

At the time of writing, we have been in lockdown for three weeks. People have permission to exercise once a day. A maximum of two people – if they are in the same household – can ride together, but group rides are not allowed. Bike shops are counted among those that can remain open, but, of course, this could change.

Riding bikes is less risky than using public transport, which could increase your risk of catching COVID-19. There are signs that more people are taking up riding bikes, and in Oxford, where there are a large number of people riding bikes anyway, it is sensible that cycling is still permitted. Even if this permission is withdrawn, cycling on an indoor ‘turbo trainer’, or – if lucky enough – in a garden on a pair of ‘rollers’ – can still work for individuals. I find static cycling is much less fun though.

At the end of March, the Chief Executive at Brompton Bikes, Will Butler-Adams, has been quotedas saying that he thinks ‘sales in the UK across the industry are probably up around 15%’. Although it is worth pointing out that since this time, Butler-Adams has reported that Brompton has seen its revenue tumble, like many other businesses, as a result of lockdown. The company wants to provide 1,000 Brompton folding bikes for NHS workers and is crowd–funding to enable them to do this.

In our towns and cities during this lockdown period, many streets are deserted, leading to an improvement in air quality, less congestion, and more room for people on bikes. It appears that the use of bikes is becoming more attractive during this crisis. It is likely that there are many people dusting off old bikes left neglected in garden sheds. However, those still driving on our roads are going faster.

In some countries temporary cycle lanes have been set up. What happens on our roads when the present crisis has run its course? Will we revert to using motor vehicles in the same way as before the virus? Will we return to poor air quality? Or, will travel to work decrease as workers experience the benefits of home–working? Bicycles could retain – and improve – their popularity as a method of transport for leisure and business. There would be an opportunity to encourage new riders by providing the necessary infrastructure to enable people to ride short distances to work.

Before the virus took hold in the UK, the Government produced a report, released in March, called ‘Decarbonising Transport’. The report highlights how ‘active travel’ can play a huge part in reaching net zero transport emissions by 2050: ‘The Government plans to undertake further research to estimate the impact of delivery of the Cycling and Walking Investment Strategy aims for 2025 and 2040 on carbon emissions for cycling and walking and through a shift to cycling and walking from private vehicles’ (p. 235, section 2.67).

The report suggests a shift, which could lead to a reduction of cars on our roads.

Maybe the present crisis will make people and governments across the globe realise that when this is over, we may not want everything in our life to go back to what it was before.

This entry was posted in Uncategorized. Bookmark the permalink.