This is the vital centre of cross city cycle routes and has long been a desired route.  Now with a contra flow already in place  in Westgate Street and Cheap Street (well almost – see post about Cheap Street) I welcome this latest development.  The changes of shared space and further contra flows obtained through the West of England Cycle City Ambition Grant, the application for which I signed off on 22nd April 2013, crossing the city will become safer and more direct for cyclists.  The shared space at the junction of Monmouth Street, Westgate Street and Kingsmead Square is an exciting prospect.

The scheme will be developed by the Council working in partnership with local businesses, Federation of Small Business, Chamber of Commerce and Bath Cycle Campaign.

Traffic at this junction is mainly buses and taxis, with a really strong walking desire line to the Cinema, Green Park and the City of Bath College that should dominate the shared space. This is real progress.

I look forward to Contra flows being in place on all one way streets,  just as they are in Belgium. 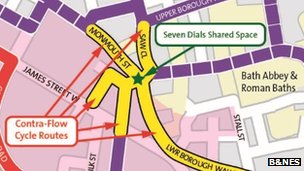 The revamp will better connect the area with Bath Spa Station and Green Park Station, according to Bath and North East Somerset Council.

Paul Crossley, council leader, said it was another step towards breaking the “stranglehold of traffic congestion”.

“We want to make Bath city centre as easy, convenient, and safe as possible for people who use bicycles as well as those on foot,” he said.

The authority has set a target completion date of April 2015.