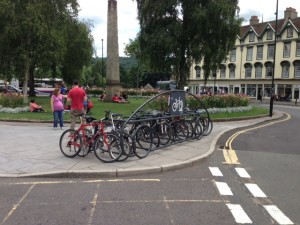 When walking in the city centre in the past few days I have been struck by the high levels of occupation of bike stands. This seems to indicate a growth in numbers of people in Bath cycling.

This is likely to be because of some touring cyclists visiting Bath, but also locals lured out on their bikes by the summer weather.  There is a need for many more stands.

Around the Guildhall on Monday there were no bike stands vacant.  The photo shows about 14 bikes locked to the “car” stand in Orange Grove.  In Kingsmead Square last Saturday morning all the stands were occupied, as were the stands outside Waitrose.  This is all good news and supports the anecdotal evidence that cycling has been boosted by the opening of the Two Tunnels Greenway.

Last week I met a Spanish family of four, who were staying in Bath and directed them from Widcombe to the Two Tunnels by the least busy route, as they were not keen to mix it with the traffic on Wells Road.  More signage to the Two Tunnels path from the city would help people unfamiliar with the area.

An increase in touring cyclists will give a boost to the economy.  Particularly as people on bikes spend more than other visitors, because the very nature of the bike means that they carry less than visitors who arrive by other means of transport.

After a couple of months the average use of the Two Tunnels route averaged 527 cyclists per day.  Of course most of these will be local leisure cyclists and commuters, but there will be some touring cyclists amongst them.

It would be useful if we could get some firm evidence for how many more people are visiting the city by bike because of the improvement and publicity about the Two Tunnels Path and the Odd Down off road circuit.

On 29th August there were 18 bikes locked to the “car stand” in Orange Grove – this must be a record.  Yesterday on Twitter a bike commuter said that he might have to stop riding his bike into the city because he could not find anywhere to park.

If you have this problem contact your local councillor to complain that there are more cycle stands needed.  There are four councillors for the city – Manda Rigby and Brian Webber for Abbey ward and Andy Furse and Dougles Nichol for Kingsmead – its in the city centre where the main shortage is.  It might be wise to contact any of these as well as your local councillor.

I have been told that there are new cycle stands to go in to the south of the Guildhall and the bicycle corral (car) is then due to be moved, but it could go into Cheap Street.  This is from the team who managed the High Street works, but they will also talk to highways to see if there is a budget for more cycle corrals for the city.  I will find out how long it will take to get the extra stands in to the south of the Guildhall.

4 Responses to Cycle stands all taken in city centre