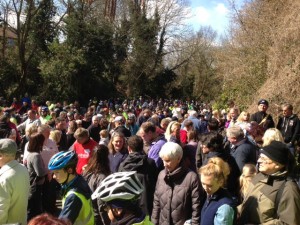 Masses of people at the opening of Two Tunnels Greenway

At the Liberal Democrat Conference from 14th to 18th September in Glasgow a motion on cycling will be discussed.  This is a first class motion and puts Lib Dems in the forefront of cycling policy.

Conference believes that:
I. Cycling is an extremely efficient and safe form of transport.
II. The Government should encourage people to cycle for the benefits it brings to health and wellbeing, the environment, the economy and the alleviation of congestion.
III. As progress is made to make Britain fit for cycling, the rights and safety of pedestrians must continue to be considered and respected.  The recommendations are based on the All Party Parliamentary Group and signals to other Parties that they too should develop policies on promoting cycling in the UK.

Conference therefore welcomes:
i) The Coalition commitment to support sustainable travel initiatives, including the promotion of cycling and walking.
ii) The recent Get Britain Cycling report from the All Party Parliamentary Cycling Group.
iii) The £600 million Local Sustainable Transport Fund for the development of transport measures focused on economic growth and reducing carbon emissions.
iv) The inclusion of cycling measures in 94 of 96 Local Authority bids for the Local Sustainable Transport Fund, and the additional UK Government investment of £107 million in cycling in the last year alone, including funding to address dangerous junctions.
v) The Times’ Cities Fit for Cycling campaign, highlighting methods for promoting cycling and road safety nationwide, and the creation of an interactive website which to date has identified 10,000 junctions requiring attention.
vi) Funding for the integration of rail and bikes, Bikeability and the continuation of the Cycle to Work scheme.
vii) The Government’s policy to promote 20 mph speed limits as the default value on residential roads.
viii) The positive legacy of the Olympics which has resulted in more people taking up cycling for pleasure and exercise.

But conferences notes that:
A. Unsustainable transport policies pursued over many decades are costing the economies of our towns and cities tens of billions of pounds through congestion, road casualties, poor air quality and the impact of inactivity on mental and physical health.
B. Three-quarters of all journeys made in the UK are five miles or less.
C. Cycling accounts for 2% of journeys made in the UK compared with 30% for the Netherlands, in part due to their dedicated fund for cycling.
D. 74% of adults in Britain are frightened by the idea of cycling on busy roads.
E. Lorries make up 5% of traffic, yet are currently responsible for half of cyclist fatalities; 75% of cyclists’ injuries occur at or near junctions.
F. More needs to be done to encourage cycling amongst women, ethnic minorities and young people, whom research indicates currently tend to cycle less.
G. Improving the environment for cyclists must not be to the detriment of pedestrians.

Conference therefore calls for:
1. The Government to further improve cycling in the UK by aiming to raise the number of journeys made by bike to 10% in 2025, rising to 25% by 2050.

2.Better cycling infrastructure through:
a) Creating a cycling budget of at least £10 per person per year, increasing to £20.
b) A requirement for Local Authorities to provide for cyclists in the planning system as well as in the design of all highways and traffic schemes, and training in how to do this.
c) Expansion of the Local Sustainable Transport Fund.
d) Integration of the cycle network with rail and bus travel.
e) Creation of high-quality, segregated cycle routes where appropriate.

3. The promotion of cycling through:
a) A Government strategy to increase Bikeability cycle training courses for people of all ages and backgrounds.
b) The provision of training and facilities in schools and places of work.
c) A cross-departmental ‘Cycling Action Plan’ drawn up in conjunction with relevant stakeholders and partners.

4. A commitment to improving the safety of cyclists on the roads through:
a) an increase of priority traffic lights for cyclists and Trixi mirrors that allow drivers to see cyclists on their near-side.
b) the adoption of vehicle safety measures such as sensors, alarms, safety bars and extra mirrors on lorries.
c) the inclusion of a cyclist safety section in the national driving test and cyclist awareness training for drivers of large vehicles.
5. Justice for victims of accidents on the roads through:
a) consultation on the introduction of proportionate liability rules so that the default assumption after collisions is that the larger vehicle is at fault.
b) review of existing road traffic laws and their enforcement to ensure that dangerous and careless driving is dealt with the seriousness it merits.
c) by ensuring cyclists, like all other road users, obey the rules of the road about rights of way, traffic lights and lights at night.
d) implementation of Part 6 of the Traffic Management Act 2004 to permit local authorities to enforce moving traffic offences, including the illegal use of cycle lanes.