Opportunity to improve cycling in Widcombe? 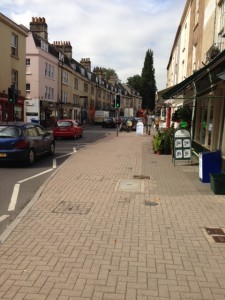 Widcombe Parade – traffic will be reduced and flow reversed 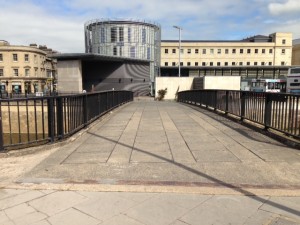 Wide bridge leading to and from Dorchester Street

When the Rossiter Road/Widcombe Parade scheme costing £1.8m is implemented, hopefully in 2014, consideration should be given on how cycling in the area can be improved. 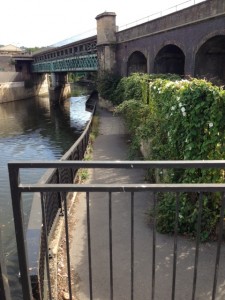 Towpath to thimble Mill. Could be part of off road cycle route through south of Bath

The basics of the scheme are that Widcombe Parade traffic will be reversed and reduced by about 80% and Rossiter Road made into two-way traffic to become the bypass that Widcombe people have fought for over a period of 30 years.  The present cycle lane should become a properly constituted cycle contraflow, with different coloured tarmac, preferably green to clearly identify it.

There is also the possibility of using the subway under the A36 as a shared path with suitable safeguards, clearly giving priority to people walking, enabling cyclists to access Holloway towards the Two Tunnels Greenway and to cross into the city.

This depends on the Council considering cycle links, not just how bikes can get safely through Widcombe. 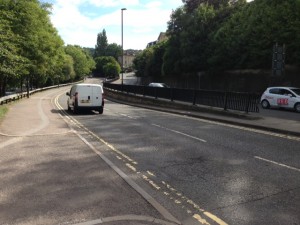 Four lanes in Claverton Street. Must be some room for cycles

In addition, but not as an alternative there could be an off road cycle path from the Churchill Bridge along the river towpath going east, which would avoid both Rossiter Road and Widcombe to connect with the towpath from Thimble Mill to Pulteney Bridge, St Johns Road and Cleveland Bridge.  This route could provide a southerly off road route for people riding bikes through the south of the city avoiding the A36 altogether.

What is needed here is for a design for cycling roughly on the route that I have outlined, taking cyclists through Widcombe Parade as well as providing an off road southerly through route.  To the west a connection with the Bristol/Bath Railway path is easy to make over the present crossing at Churchill Bridge.

I have many misgivings about a scheme that is mainly designed to ensure continued traffic flow through the area, rather than prioritising the regeneration of Widcombe Parade and its local shops.  However, this is an opportunity to design for much improved safety for people on bikes.  The bulk of the money is to be spent not on regenerating Widcombe Parade and improving cycling, but on improving traffic flow.  Surely the time has come to shift priorities from motor traffic to people on foot and on bikes.

If the Council is serious about giving a high priority to people on bikes officers could carry out  a brief study of cycle links around Widcombe.   This would enable investment in both on and off road cycle links, which would be of great benefit to local people and visitors to the area and signal that the Council is prepared to take cycling seriously.

8 Responses to Opportunity to improve cycling in Widcombe?