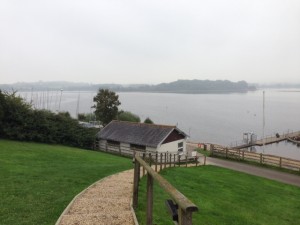 Lovely view across the Lake from the Sailing Club

You could be excused if you thought that it would be easy to ride or walk all the way around the Chew Valley Lake, but you would be mistaken.  This beautiful “man made” reservoir in the heart of the Valley, close to Chew Magna and Chew Stoke should be a prime tourist attraction.  To a certain extent it is, provided you don’t want to walk or cycle around it.

You can drive to the car parks or join the yacht club, but canoeing and kayaking are not allowed, you can fish or watch birds provided you have a license and walk in. Little cycling is allowed on Bristol Water’s land around the Lake, other than on some very popular shared paths close to a car park and picnic area.  Some of the old roads that used to traverse the valley go into the lake or are in the area around the lake and could be converted to a continuous shared path with a minimum of funding.

One of the linking paths that could be upgraded

Back in 1999 Margaret Wilson had the idea to gain access for the public to be able to walk or cycle around the lake on the old roads around the valley, safely and separated from traffic.

As a result the Chew Valley Recreational Trail  Association (CVRTA) was formed with Bill Blythe as it’s present Chairman and five other local people, one of whom is Margaret Wilson.

The group have made considerable progress.  The project to provide access around the lake was adopted by Bath and North East Somerset Council in 2001 and it has the support of local Parish Councils.  The long westerly section of the lake now has an off road cycle and walking path alongside the busy main road from Chew Stoke towards West Harptree.  Part of the eastern side from the dam towards Bishop Sutton and close to the lakeside, is already a walking route and B&NES have obtained planning permission for a shared path.  It’s just the funding that is missing for that area at present.

Most of the old roads have Bristol Water signs such as “Private Property”, “no cycling”, “no dogs”,”dogs must be kept on leads”, “no public access”.  You get the idea – the public is not welcome and is being denied access to this beautiful landscape.

No one is suggesting that access is given without a risk assessment and some restrictions to protect the wild life of this Site of Special Scientific Interest (SSSI). However, not only is it totally unreasonable to restrict access, but it is possibly not in accordance with the Bristol Water’s legal requirements to allow access to land under its control.  There is even a notice asking cyclists to dismount in the car park at Woodford Lodge, Bristol Water’s restaurant.

It is here that a key connection between the Sailing Club and Woodford Lodge near Chew Stoke could be made.  This would link existing tarmac roads, by building a connection of just a few hundred metres along an existing private path.

However, this crucial section of the lake in the northwest corner between the sailing club and restaurant and the one at the southern end of the lake need some work to link existing paths that at present are restricted by Bristol Water.

The company has never welcomed the idea of a trail. As a group of local people we have felt short of “clout” when dealing with the company. We have never achieved a detailed discussion with representatives of the company.  I understand that the company’s unwillingness to have the road to the sailing club used is based on consideration of safety. For all the other roads and areas, protection of the SSSI status is cited.

Many of the roads around the lake could be used, but Bristol Water is reluctant to allow people to mix with the flora and fauna.

I think everyone can understand the need to protect the natural habitats of the animals that live in the area, but this is done very successfully and with great care in many other areas.  In any case many of the paths that could be used are well away from the shores of the lake.

The Chew Valley Trail Association are so frustrated that they have approached the Department of Food and Rural Affairs (DEFRA) to ask whether Bristol Water have complied with the legal requirements to allow access to land under their control.   In particular the old tarmac roads.

Another member of the group, a retired water engineer with knowledge of the industry and the legislation with regards to access to the land of water companies, has been pursuing the case with DEFRA for over a year now.  It is hoped that the Secretary of State will give a decision by Christmas, after examining submissions from CVRTA and Bristol Water.

Off road path in background, an area south of the lake. In the foreground There is plenty of space for an off road path. There are a number of old roads that could be used that come out near this point, but now cycling or walking on the busy  road is the only option

After 14 years it seems that we should soon know whether the Secretary of State has accepted  arguments for more public access or those for continued restriction by Bristol Water.

At Chew Valley Lake with goodwill and care the lake could become a terrific asset for local people to enjoy and to bring visitors to the area .  The best type of visitors too – those who walk and ride bicycles do least damage to the environment, probably spend more money and are mindful of the natural world.

Update:    DEFRA have indeed given a ruling that Bristol Water are not in contravention of a duty under water legislation to make access to their land easier.