This is my first post for over a month because I fell off my bike and broke my hip.  I am now recovering at home, but won’t be riding until at least the new year.  There was no-one else involved in my crash. 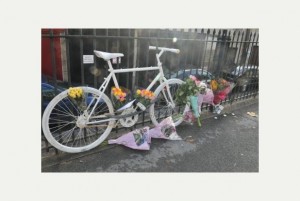 Much has been written in the Chronicle this week about the problems faced by cyclists.  I was asked, among others interested in cycling, to make a contribution to the paper.  Part of what I had to say is reproduced below:

There is a need for space to be allocated to people who ride bikes, but we should all work towards a new understanding of the issues and problems that road users face, with much more consideration given to people walking and cycling who are the most vulnerable.

Educating everyone to recognise that all users have rights and responsibilities when using the roads is necessary, such as being vigilant and not being distracted by an iPod or talking on a mobile phone. Tolerance, awareness, concentration and understanding should be ingrained in all, rather than impatience, anger and intolerance, as is often the case.

Read more: http://www.bathchronicle.co.uk/CycleBath-Jack-Gilmore-s-tragic-death-spur-make/story-20104877-detail/story.html#ixzz2lZQ6pVJq
This entry was posted in Cycling around Bath. Bookmark the permalink.