I have watched a fair amount of cycling on Television over the past month or so.  The coverage given to the Tour de France and the Commonwealth Games cycling events has been fantastic.  To cover the whole of the men’s and women’s Commonwealth Games road races, practically a whole day’s viewing, was spectacular.   We have the Ride London race to look forward to on Saturday and then from 23rd August daily highlights from the Vuelta Espana (Tour of Spain).  It shows just how far cycling has come in Britain in the past few years.

Cycling is not the only sport to benefit from expert commentators and pundits, but it is certainly amongst the top for expertise, humour, interest and entertainment.  Gary Imlach has his own style as the broadcaster and professional journalist, who brings the whole Tour de France broadcast project together.  The ITV team is second to none.  In Chris Boardman they have experience of top class cycling both on road and on the track.

Chris Boardman and Ned Boulting at the Tour 2014track,

His technical expertise and the time he spent with Team Sky gives him a unique insight into the sport.  He is also a natural in front of the camera, very down to earth and able to explain the more obscure parts of the Tour.  His double act with Ned Boulting,  who plays the Eric Morecombe to Chis’s Ernie Wise is great entertainment with a touch of real insight into some of the stages in the Tour. Paul Sherwen as a former professional cyclist, who has ridden the Tour provides more experience and sporting expertise. 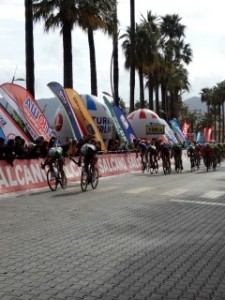 Two years ago while holidaying in France (watched two stages of the Tour – finish in Pau and a flash of Bradley in yellow descending in a village on the next stage), we listened every night to the radio podcasts, where commentators and pundits, Ned ,Chris, Gary Imlach, Phil Liggett, Paul  Sherwen and Matt Rendle, meet over a glass or two and discuss the day’s events.  It is hilarious, but also gives an insight into on and off road at the Tour.

This is the broadcasting team that year after year presents, commentates and evaluates Le Tour.   They all obviously love the event.  Such is the hold the Tour has.

Just need a Women’s Tour de France to start and then perhaps Emma Pooley, Nicole Cooke, Victoria Pendleton and Sarah Storey could do the commentary.  They would be great.