Campaigning for 20 mph limits in Combe
Down

B&NES Council has carried out a review of “signs only” 20mph speed limits.  These speed limits, mainly on residential streets, were put in place by the last Liberal Democrat Administration from 2011 to 2015.

20mph speed limit “zones”  had been put in place in some areas in previous years, but in these small zones physical measures to reduce speed, such as speed tables, had also been built.  These physical measures are expensive and were often unpopular with bus companies and with local residents, so for reasons of finance they could not be implemented throughout the council area. The total cost of £871k to place 20mph speed limits on all residential streets (except in Midsomer Norton, where the consultation showed a small majority in favour of speed limits, but all local and parish councillors opposed – so speed limits were not implemented) is in my view good value for money.

In some areas, such as in Combe Down village “advisory” green signs had been put in place, but these, unlike the red circle “signs only” limits could not be enforced.

It is worth stating here, the principles behind the “signs only” initiative  when it was implemented in 2011:

The report going to the scrutiny committee, which deals with transport matters seems to be pretty negative about 20mph “signs only” speed limits.  Yet the report admits to a reduction in speed in the sample streets of 1.3mph. 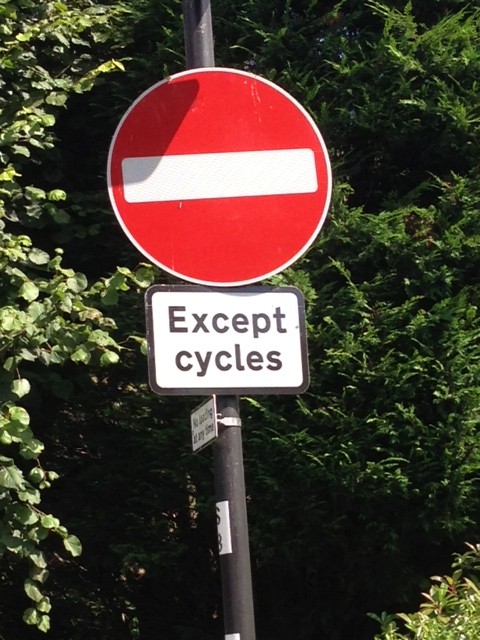 Sadly, where the report finds there has been no reduction or a small increase in “crashes” it takes the usual motor vehicle view of blaming people on bikes and on foot. In the report it says about a slight  increase in crashes in a few streets:

“There is no simple explanation for this adverse trend but it could be that local people perceive the area to be safer due to the presence of the 20mph restrictions and thus are less diligent when walking and crossing roads, cycling or otherwise travelling.”

This blaming the victims is nothing short of disgraceful in a committee report.  Any crashes resulting in injuries to vulnerable people are usually the fault of drivers and in are often serious because of the vulnerability of people when compared to tons of metal.

The council is fond of quoting extracts from Dept for Transport circulars where it suits them, but the following, issued in 2014, does not feature:

“Major streets could be subject to 20mph speed limits where there are or could be, significant journeys on foot and/or where cycle movements are an important consideration, and this outweighs the disadvantage of longer journey times to vehicular Transport”.          (Dept of Transport Circular)

So here the DfT was promoting the expansion of 20mph limits on major roads, where appropriate.  This does not fit the conclusion reached by the Council’s report to scrutiny of course:

“d) Overall, the speed limit programme in B&NES seems to have provided little in the way of persuasive argument for continuing the programme into the future.”

I really don’t understand this, the 20mph programme has been completed and apart from a small number of adjustments, where a street has been missed or a street has proved inappropriate to a 20mph speed limit.  It seems that this review does not recommend any further action.

I feel that I must mention the terminology used in this report.  Here “road accidents” is used, when “road crashes” would seem to be more appropriate.  For instance the awful crash in Weston village, causing 5 casualties is referred to as an “accident” when the driver of the truck ignored a weight limit sign and the vehicle was proved to be deficient in many safety aspects.  This should certainly not be referred to as an accident – it was a wholly avoidable crash, resulting in fatalities.

PS. more information on 20mph speed limits can be found on Rod King’s web site 20splentyforus on the right of this post