Riding a bike in Oxford

Posted on 14 October 2019 by Roger
My partner and I moved to Iffley in Oxford nearly three months ago. We had lived in Combe Down in Bath for the past 25 years. We had a number of reasons for moving to Oxford, not least among them was because Oxford is flat and there is a critical mass of people riding bikes, so this is a normal mode of transport for all ages. In our experience so far, most drivers are used to being considerate and careful around the many people on bikes. For us this has meant that riding our bikes has become a regular, every day activity.

This was not the case in Bath, where Combe Down is about 200 metres above sea level, so climbing this entire height occurred in the kilometre long hill (Ralph Allen Drive) every time that we went home on our bikes, often loaded with shopping. We both have low gears on our bikes, but this climb had become harder recently. I had restricted myself to climbing the hill once a week. Climbing in the Drive had never appealed to Nic anyway. Once off the hills in the City of Bath you have to take your chances on the busy roads with drivers not used to having to adjust to people riding bikes. Many of whom feel that people on bikes should not be on the road, and behave accordingly.

This attitude seems to be endorsed by officers in B&NES Council’s highways department, who do not see the point of taking road space from motor vehicles and building infrastructure for people riding bikes. Yet off road cycle ways are common, with the Two Tunnels path (mainly built by the cycling community and Sustrans the cycle charity whose offices are in the Bristol) ) on the old Somerset and Dorset Railway connecting with the Bristol/Bath cycle path (mainly built by Bristol City Council and Sustrans 30 years ago, being their“jewel in the crown”). 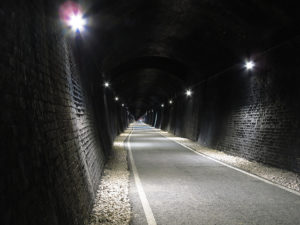 Old Combe Down Tunnel. Over 1 mile long. On the Two Tunnels path

These off road leisure routes are shared by people walking and on bikes, with few problems. There are other shared routes along the Kennet and Avon canal, but until officers and councillors change the attitude of putting “traffic flow” before all else, people riding bikes will never be able to use bikes for everyday shopping and commuting. CycleBath, the cycle campaigning group is very active in lobbying councillors and some of the present new Cabinet members are keen to develop cycling in the City, so there is more hope of cycling improvements than ever before.

In Oxford we have noticed that there is some infrastructure for people riding bikes. In particular at Donnington Bridge, where there is access to the Thames Path, in itself a shared path running into the heart of Oxford. On the bridge, road space has been taken to provide a double width segregated cycle way on one side of the bridge, with physical barriers, and a single white broken line painted on the other side of the road.

Throughout the city there are cycle lanes on many roads. They are mostly just markings on roads, but space has been given to people riding bikes with space for two vehicles and no more, the resultant space gain making it possible to have cycle lanes.
Sadly the cycle lanes are mostly marked  with broken white lines, meaning that they are not enforceable, so drivers regularly park across them. Although even with a wide cycle lane on one side of the road, On Donnington Bridge and on the approaches to the bridge, there is another cycle lane on the other side. It is only a broken white line, but still a useful

Not such a good Lane,but still something on the bridge

This is not a route we often use because we live very close to the Thames at Iffley Lock to the south of Donnington Bridge. The Thames path, accessed at Iffley Lock is shared and is quite wide enough for Bikes and people. By the path it is about 20 minutes to the Railway Station.

Leaving bikes at the Railway Station is easy,as there are masses of cycle stands there. In fact there are stands across the city, so bikes can usually be locked to a cycle stand unless they are full up, which sometimes happens, following the mantra from Field of Dreams of “if you build them, they will come.” Many people have cycle stands in their front gardens too. It is also usual to see parking spaces on roads taken to provide space for bike stands as shown in the photo below. 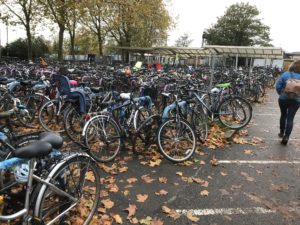 Although we recognise that there is more to be done here, we are not disappointed with our ability to cycle in Oxford. Getting on our bikes for shopping, for eating out, visiting friends and for entertainment has become normal. It was never so in Bath. There is of course much more to be done for bikes in Oxford and

consultation has just ended on a new a Transport Strategy for Oxford. A quick easy win would be for the County Council to change all cycle lane markings to continuous lines, which could then be enforced.

In Oxford, as in Bath there is a campaign group to promote bike riding. In Bath the group is CycleBath and in Oxford, Cyclox. We have taken up membership of Cyclox.

Perhaps the time has come for riding bikes to be given its rightful place as a sustainable transport method in these days when there is great concern about Air Quality in cities.

Our verdict on cycling in Oxford, where there is a critical mass of people riding, is good, but with 24% of commuter trips by bike, still lagging 14% behind Cambridge so there is still room for improvement.

2 Responses to Riding a bike in Oxford