My partner and I are recent Oxford residents and we love the city. We moved from Bath at the beginning of August 2019. One of the main reasons for the move was that Oxford is flat. Also we were impressed by the number of people riding bikes and the bike infrastructure. In fact Oxford is second of UK cities with 24% of journeys by bike. Cambridge is first with 38%.

Therefore it was disappointing to find that bikes did not get a mention in the Council’s Scrutiny Committee Review of Tourism in May 2019. Much was made of the lack of overnight visitors, yet nothing was said about encouraging visitors on bikes, despite the fact that they carry little with them, consequently will spend more here, are more likely to stay overnight and make no adverse impact on the environment.

There was no encouragement to use Oxford as a base to tour the area. The many quiet roads and timeless little villages with cafes and pubs are a great attraction for bike tourers. For those who prefer hills to flat rolling countryside the Chilterns are close.

Oxford has more to offer than beautiful buildings and museums.  The ethnic restaurants on the Cowley Road, the Covered Market, the Botanical Gardens, river and canal walks/rides, villages, such as Thrupp, Woodstock and Brill in the Chilterns with its windmill, (admittedly just over the border in Bucks) are within easy reach for bikes. However I have yet to see any sign of bicycle tourists in the City. 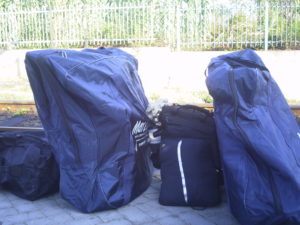 Bike tourism. Bikes in bags, with panniers, waiting for the train.

The report has missed an opportunity to promote Oxford as a bike friendly city for people to use as a base for touring. A small booklet, with basic circular routes might help. All interested agencies in the city and county, including the Universities and business must be brought together to provide a vision for the development of Oxford attractions if the city is to retain and improve its place as one of the premier visitor Cities in the UK.

Public transport connections and therefore numbers of visitors, are good from London and from the west of England. Most trains from Bristol and beyond, since the recent timetable changes stop at Didcot, but from South Wales nearly all the trains to Oxford involve 2 changes. There used to be a direct service between Bristol and Oxford, so perhaps the councils should lobby First Great Western to restore this service and improve the connection with the west of England and South Wales.

I wonder what has happened to the scrutiny report, after it was presented to the council cabinet on 29th May 2019? How much progress has been made on the implementing the recommendations?

Oxford can promote itself as a sustainable city. Already many people accessing Oxford walk and ride bikes, use public transport and the Park&Rides. Future development and visitor strategies and action plans should aim to embrace and enhance this sustainable accessibility.

This was an article written by me for Cyclox’ in their weekly column in the Oxford Mail “On yer bike”.

This entry was posted in Oxford bike issues, Uncategorized. Bookmark the permalink.