A Great Opportunity to Increase Cycling in Oxford 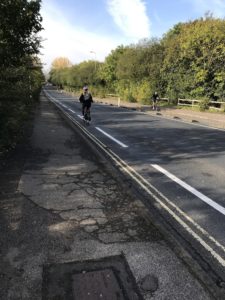 Cycle lane in Oxford – much too narrow

So now we know! Oxfordshire County Council have been successful in bidding for Government funds to enable people to safely socially distance in our towns and cities as lock down is relaxed. We now also know where the money will be spent through a press release issued by the County Council on 5th June 2020. £600,000 to be spent in the next 8 weeks, as part of £2.9 million allocated to Oxfordshire “to  improve cycling infrastructure, parts of the roadwork network and footpaths”.

This Government funding is specifically to improve travel and make it safer during the continuing Covid19 crisis. The £600,000 will be “spent equally across  Oxfordshire”. This decision, no doubt to satisfy out of town councillors appears to me to be unfair. Surely the funds should be allocated where there is greatest need? This would appear to be in the City, where there are most people (pop.155,000) in addition to people going into Oxford to work.

It will be impossible in many cases for people to socially distance on the narrow Oxford pavements. They will have to step into the road. Given the increase in sales of bicycles during this period there are likely to be more people cycling along inadequate cycle lanes. This will all be compounded by an increase in motor traffic given that people will be reluctant to use public transport, given the risks of catching the virus. If people are to be encouraged to continue riding bikes and to walk, more space for these means of travel must be provided, or do we really want to go back to the polluted streets of pre-Covid?

The two sentences that would have the greatest impact on Oxford from the County’s press release are as follows:

And yet no further details are given. Surely there must be some plans?

Throughout the Country cities are already making alterations to assist in getting workers back to work and to restart their economies.

Some of the measures being put into place elsewhere are:

It would be good to know what action, if any is to be taken to assist Oxford’s economy and to move towards the increase in cycling envisaged by the recently completed Oxford Local Cycling and Walking Infrastructure Plan, where the 25% of journeys taken by bicycle, before Covid 19 would go to 38% by 2031.

The figures in this report should be looked at again to take into account the increase in cycling that there has been during Covid19.

Surely the opportunity to take a massive step towards providing the infrastructure to enable the aims of this plan to be achieved must not be missed.

This entry was posted in Oxford bike issues. Bookmark the permalink.