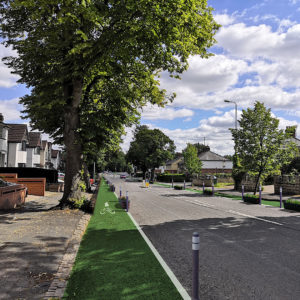 According to figures from the national road traffic accident database (reported recently in the Times), over the past 3 years the “top ten” roads in the country, outside of London, for crashes involving people riding bikes, included several in Oxford and Cambridge. Both these cities have the highest rate of cycling in the country, with 25% and 40% respectively of commuter trips by bike, so at first glance being top of the league table of crashes would seem to be contradictory.

The roads in Oxford with poor collision records are Iffley Road, Cowley Road and The Plain. The two roads are the main access from East Oxford into the city centre, both converging at the roundabout on the Plain. But are they really that dangerous? In Oxford the success of getting more people on bikes should be considered as part of these figures. If there were fewer people riding bikes there would be fewer accidents.

But any injury is one injury too many. Cycling campaigners across the country have tried to influence councils to invest in better cycling infrastructure. While infrastructure is still far below the standards we wish for, there is a glimmer of light. We are lucky in Oxford to have an excellent and comprehensive Local Cycling and Walking Infrastructure Plan (LCWIP) which aims to double cycle journeys in Oxford by 2031.

Central Government has provided funding for local authorities to spend on cycling infrastructure, as a result of Covid-19 – the Emergency Active Travel Fund. The good news is that Oxfordshire has been successful in getting some of this cash, so the opportunity is there for some of the policies in the LCWIP to be realised.

We know what needs to be done to improve cycling rates. Reducing motorised traffic on our roads is top of the list, and implementing the plans for bus gates should make a big difference. But even bus gates won’t be sufficient to encourage those less confident onto their bikes unless there is good cycling infrastructure, which physically separates bikes from motor vehicles. Just painting white lines on roads is not enough to protect people on bikes. We would also like to see 20mph speed limits across the city.

Oxfordshire active travel campaigners ran a “pop up shop” in Ship Street in July to set out a vision of what the streets of Oxford could look like if there were fewer cars and safer roads. Imagine Iffley Road with no cars parked along it, and safe cycleways along its length.

If cycling safety is improved through better infrastructure there is no reason why the County Council’s target of increasing the levels of cycling to 50% should not be achieved.

The opportunity and incentive is there for the County Council to take action now, after achieving nearly £3m Covid-19 fundingfrom government, on how to take Oxford roads off the list of top 10 “hotspots” and make people on bikes safer on our roads, whilst at the same time moving Oxford towards the aims set out in the Local Cycling and Walking infrastructure Plan.

Photo: Iffley Road as it could be. Designed by Andy Coram.
Article first published in “Onyerbike”, the Cyclox column in the Oxford Mail.

This entry was posted in Riding bikes in Oxford. Bookmark the permalink.