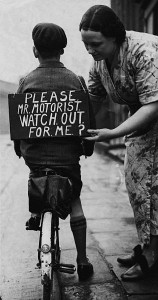 In a study by Brunel and Bath Universities the research team found that no matter what cyclists wore, it made no difference to how close some motorist overtook.

This means the solution to stopping cyclists being hurt by overtaking vehicles has to lie outside the cyclist. We can’t make cycling safer by telling cyclists what they should wear. Rather, we should be creating safer spaces for cycling – perhaps by building high-quality separate cycle paths, by encouraging gentler roads with less stop-start traffic, or by making drivers more aware of how it feels to cycle on our roads and the consequences of impatient overtaking.

Some good sense here and of course we want cycling to become everyday with people riding their bikes to work in normal clothing.  This is how it is in the Netherlands.  One of the issues with the UK is that cyclists seem to be different and are viewed with suspicion by motorists, rather than being looked at as ordinary people riding bikes.

The image of special clothing should not be what we first think of when anyone mentions a cyclist, but I’m afraid that it is. I wear a helmet and a fluorescent vest because I feel exposed if I don’t as I have to share road space with huge hunks of metal travelling far too fast. The answer is of course as concluded by Ian Garrard by creating safer spaces for cycling on our roads.